Do We Need Political Parties? 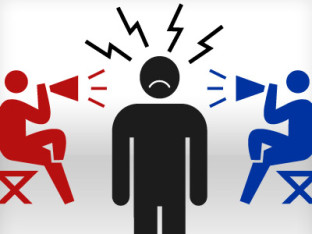 It’s interesting how many non-Millennials are suddenly talking about Millennials as if they understand us, specifically in the political sphere. Why aren’t Millennials being invited to speak about ourselves when it comes to our interpretations of election campaigns, candidates, political leaders, and what we want for our future?

If there’s going to be an honest and intelligent discussion about the future of politics, it needs to be led and deliberated by Millennials.

75% of Millennials believe government has the greatest potential to address society’s biggest issues but are overwhelmingly failing to do so. Half of us actually believe government currently has a negative impact on the top challenges facing us. Does this mean partisanship isn’t working?

In recent years, due to increasing exasperation with the perceived ineffectiveness of politicians and government, discussion of the political sphere has included that of post-partisanship. But is that really the inoculation required for hyper-partisanship, polarizing ideologies, and governmental gridlock?

The concept of post-partisanship is at best a vacuous one – feel good rhetoric about cooperation, compromise and teamwork sound great, but do they lead to results? Are they effective and responsive to the pressures of time?

The individuals I’ve observed recently talking about being “post-partisans” are actually far-out-there liberals who had posed as progressive conservatives (in a jurisdiction that overwhelmingly supports a progressive conservative platform) and failed when their policy intentions came to light, as well as their disinclination toward collaboration. The response of these particular individuals is “I’m a post-partisan” as if they think publicly shrugging off their flexible values even further will somehow put them beyond reproach.

Where do forms of non-partisanship work?

In Canada, we have two jurisdictions that govern without political parties in self-government – the North West Territories and the Territory of Nunavut. Direct democracy appears to works here because of the regions’ culture and heritage and small, widely dispersed populations. The NWT and Nunavut are in Canada’s far north, comprised primarily of the indigenous Inuit people, who extend across the north into Alaska and Greenland as well. Their cultures value looking after one another closely, based in the necessity for survival in the north’s harsh conditions.

Switzerland is a bit of an anomaly in many aspects. It is another example of direct democracy, though they do have political parties. Decisions are made by citizens through referenda on laws and amendments to their constitution, and Switzerland enjoys a very stable government and political environment under a coalition government. Again, political decision-making here is localized at a very grassroots level.

Neither of these examples are of post-partisans, of course, because aren’t any successful examples. Post-partisanism doesn’t work.

It is possible for competing political parties to cooperate. It happens all the time when bills are becoming legislation and support from the other side of the aisle is needed, along with negotiation and compromise, to ensure the goal is achieved. Not every policy issue is a matter of contention – many are of practicality, particularly depending on the level of government. Other times, it is in the best interests of competing parties to cooperate to out-maneuver another; a crude description being “my enemy’s enemy is my friend.”

The problem that is especially evident in the United States is the point of incapacity where nothing moves at all when dominant parties refuse to budge. Without cooperation and finding the common ground that unites us, decision making and public policy development prevent the needs of the citizens from being advanced. Millennials need political dialogue to be open and respectful for us to address and expertly manage the complex issues our generation is faced with.

When we keep an open mind and are truly respectful of one another’s opinions – understanding what led each of us personally to the values we’ve come to hold – it will be much easier to find the common ground between parties and represent a citizenship that can often appreciate policy positions from more than one party at a time, or a position that two or more parties share. The ultimate goal is to represent this moderate majority.

Millennials have values just like any other generation, which translate into inherent political bias and leanings. We all believe something. We simply do not see our combination of values reflected in existing parties.

What is the benefit of majority governments versus coalition governments? Stability. It communicates a clear message to the industries and investors of our economies of what to expect, which provides stability for what taxpayers can expect. Majority governments don’t face political road blocking from opposition, preventing legislation from being passed – which does run the risk of being a positive or a negative.

Coalition governments, as in the case of Switzerland, can be effective. But more often than not, as we see in Australia and the majority of Western Europe, coalition governments are very unstable, relying heavily on cooperation and compromise that may not always be forthcoming, stalling progress. Governments collapse and elections become more frequent. Long term vision and planning for countries are impossible without a united vision supported by the electorate.

Post-partisanism is as ineffective and counter-productive as the ideological purity of the far-left and far-right wings. We need more centrism in politics, a mix of values from each side of the spectrum that reflects where people’s values are really at. We need moderation, not a post-partisan abdication of values and responsibility to be transparent about decision-making and expected outcomes.

Millennials need to understand why we identify with particular values, candidates and parties. This is why partisanship is important. It provides the context within which we know how to identify ourselves and communicate this to others we don’t know and are seeking support from. Voters need a reference point, or for all they know a candidate will campaign out of one side of their mouth and support contradictory policies out of the other.

For Millennials to earn the trust of our peers and of the other generations we are responsible for taking care of, partisanship simply needs to evolve and reflect our values as they currently are. Our political parties have a difficult path to this realization coming to them.