The Choice That Started My Career 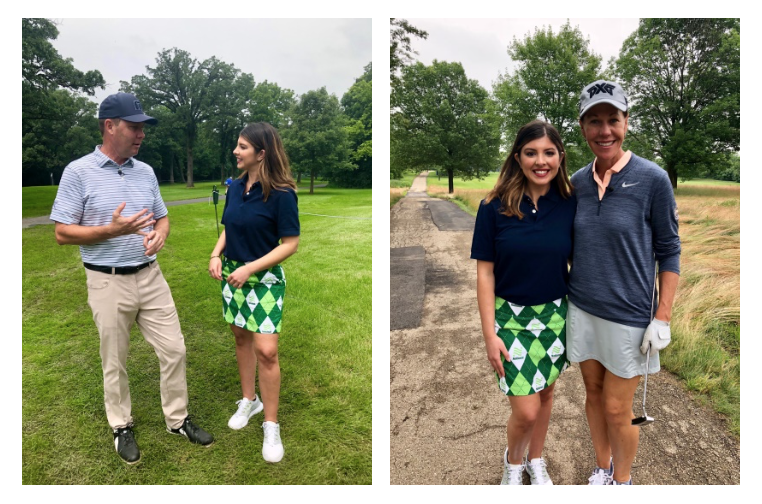 One of my favorite things about my job is that I get to speak to incredible people with unique experiences and stories from all over the world. Recently, during my trip to Chicago to attend the 2018 KPMG Women’s Leadership Summit, I had the opportunity, thanks to National Car Rental, to speak with LPGA Commissioner, Mike Whan, and Incoming President of the PGA of America, Suzy Whaley. During my conversation with Mike and Suzy while walking on the vibrant green golf course, they each shared a story about a specific choice they made in their career and the result from that defining moment. After hearing their stories, my wheels started turning and I began to reflect on my own beginnings and a pivotal moment that made me!

Now, I don’t believe that there is one, and only one, moment that makes a person. But, I do believe that there are specific choices we make in life that  influence and shape our path and future. A defining moment that comes to mind is back in 2007 when I was 16 years old and had the concept for my first radio talk show, Teen Talk LIVE. But first, let me remind you what was going on in 2007… Steve Jobs announced that the first iPhone would be released on June 29, 2007, and just one year earlier on September 26, 2006, Facebook was newly-opened to everyone over 13 years old with a valid email address. Not only was the iPhone and social media in its infancy, the term millennial didn’t exist, and there was truly no platform for “teens” to come together and have a voice. I was determined to change the conversation that was happening about my peers and was so passionate about creating a platform to empower my generation – not belittle it – as there was a lot of negative chatter about “teens” at this time.

So, my 16-year-old self gathered all that I had learned from my high school television production program and put together a radio talk show pitch. Today, my teenage self would think about launching a YouTube or IG TV channel, but back in 2007 my best option was local AM radio.

And so, I prepared my pitch as best as I could, did my best to control my nerves, and made the trip to West Palm Beach Clear Channel Studios to meet with the president of the station. The president and I met alone in a huge conference room where we sat on opposite sides of a long rectangular table that could probably fit 20 people comfortably. Intimidating? Yes! As soon as my butt hit the chair the president looked me straight in the eye and simply said, “Go,” and so I began.

Seconds after I finished my pitch, the president swiftly got up from his chair and in complete silence left the room. In that moment the Jeopardy soundtrack started playing in my head and I started racking my brain asking myself, what did I do wrong? As I stood there scratching my head in confusion I realized I had a choice to make, throw in the towel or slow my roll and take a beat. I decided to sit down and give it a little time thinking, maybe he just needed to use the restroom or something. After sitting in the silent, empty room for what felt like the longest 20 minutes ever, I was about to walk out. But then, something happened that would truly change my life forever. The door started to open and there he was, the president of the station holding a stack of papers. After he closed the door behind him, he sat down and put the papers and a pen in front of me and said, “Chelsea, I want to help you start your career!” Turns out, that pile of paper was a contract giving Teen Talk LIVE the green light and the first LIVE episode was three months later. 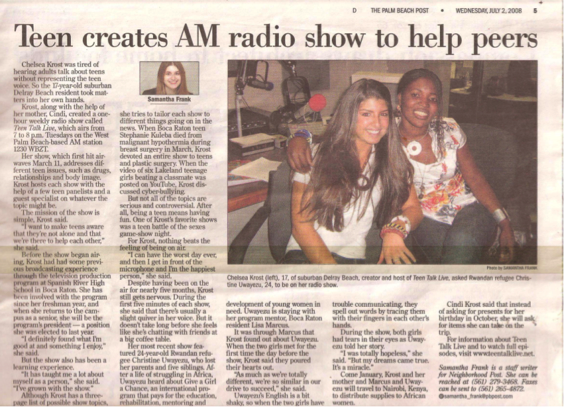 Teen Talk LIVE was one of the best choices I made and was truly the catalyst to my now 10-year career in broadcasting and hosting. I believe that moment when the president of the station left room was very significant. In that moment I could have given up, walked out and never tried again. However, I remained persistent and patient and didn’t leave the room.

This defining moment made me think of how many opportunities we miss out on because we don’t try or aren’t patient enough to give it a chance. I wholeheartedly believe that preparation, patience, and persistence helped me land this opportunity and the 3 P’s are something I practice every day within my personal and professional life.

Did my defining moment make you start thinking about certain choices that you’ve made? I am sure it did!

If you would like to watch Suzy Whaley and Mike Whan’s tell their inspiring Defining Moment stories, click the links below.