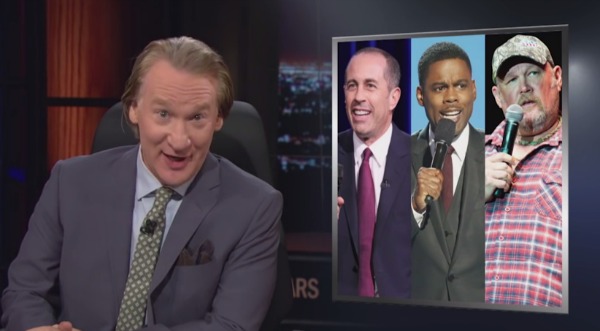 Earlier this month, Spike TV censored a joke delivered by Clint Eastwood during its Guys’ Choice Awards. While presenting an award to Dwayne “The Rock” Johnson, Eastwood compared Johnson to other athletes-turned-actors and referenced Caitlyn Jenner. Now, I don’t think Clint Eastwood’s joke was particularly funny, but it wasn’t in any way offensive either. Yes, Jenner’s name was mentioned, but it was mentioned in a way that should draw groans, not outrage – and certainly not censorship.

What’s driving this heightened level of sensitivity? According to comedian Bill Maher, it’s college-aged Millennials. And I agree. On his weekly show Real Time, Maher called out Spike TV for pandering to an oversensitive generation before tearing into the college student who authored “An Open Letter to Jerry Seinfeld from a ‘Politically Correct’ College Student.” Maher’s rant wasn’t the first time he entered into a spat with the college generation. In December of last year, Maher spoke at Berkeley’s commencement ceremony, but this was after students tried to petition that he be replaced due to comments he made on his show during a lively argument with Ben Affleck over Islam. The petition failed and Bill remained the commencement speaker, but the petition generated a whopping 6,000 supporters.

I get why college students are quick to slam what they perceive as old or unfair stereotypes. But if college students are serious about improving society and the world, they first need to learn how to take a joke. Maher pointed out that Jerry Seinfeld, Chris Rock, and Larry the Cable Guy all won’t play colleges because those audiences are too easily offended. Let that sink in. If those three all agree on something, then there’s probably some truth to their assessment.

Context is the most important factor in this discussion, but our media hungry generation has little time for context. Millennials are communicating in 140 characters or less, and they want everything in quick, easily digestible sound bites. We need to understand that making a joke about race or gender doesn’t automatically make it racist or sexist. Similarly, mentioning Caitlyn Jenner’s name doesn’t necessarily make a joke transphobic. The context of a joke reveals its nature and intent. Furthermore, if Jenner, a former Olympic hero, is able to smile and laugh about her own situation, she doesn’t need Spike TV or the PC police protecting her from a lame, insignificant joke.

Edgy Comedy is Nothing New

Mark Twain and Benjamin Franklin are two of the best examples of America’s long history of provocative humor. Both men were known for unleashing their sharp, and at times dirty sense of humors. Franklin even wrote a book called Fart Proudly. If young adults of that time were as fickle as they are today, some of these men’s work may have never made it past the printing press. In recent years, the “n-word” has been censored out of Twain’s work. I’m obviously not in favor of proliferating the use of that wretched word, but removing it is an act of censorship that dilutes the work of a great American novel. In reality, the word was used throughout this book to expose the wickedness of racism. As Twain himself said, “Censorship is telling a man he can’t have a steak because a baby can’t chew it.” When it comes to comedy, it’s time we quit pandering to the babies of our generation.

I’d rather be offended from time to time than allow the most outspoken, overly sensitive members of our generation to dilute contemporary comedy. Censorship is dangerous, especially in a Digital Age where we depend on free and open communication. It’s a two-way street. We all have free speech in this country, but nobody has the right to not be offended.

With all the tension in the world – racial, religious, political and so forth – we need comedians now more than ever. Laugher should be a key ingredient to easing that tension and elevating the level of modern discourse. Comedy will always be a vital part of the human experience, and we shouldn’t let a mob of humorless young people temper it with their radical brand of sensitivity.

As a millennial, remote working is not anything strange, and it might just be the way as we advance. We are beginning to see more interviews holding for people to work remotely. This is, of course, a good thing for many reasons. However, there are certain things that you...

END_OF_DOCUMENT_TOKEN_TO_BE_REPLACED

How COVID-19 Birthed the Millennial Caregiver

While plenty of millennials and other young people are used to offering care for others or having caring responsibilities at home, that certainly isn’t the case for everyone. It’s no secret that millennials are having less children than generations before, and that the COVID-19 pandemic has caused people to...

END_OF_DOCUMENT_TOKEN_TO_BE_REPLACED

13 Cheap Cheap Amazon Finds You Need in Your Cube

Your cube looks pretty sad, but so does your wallet. You want cheap options to lighten up your workspace without breaking the bank. You've come to the right place! My first cube after college came with immense excitement because I had the opportunity to decorate my very own work space....

END_OF_DOCUMENT_TOKEN_TO_BE_REPLACED

How to Take Control of Your Career- #MillennialTalk Recap

Laurie Ruettimann was uninspired. She blamed others and herself for her unhappiness. That was 10 years ago, when she realized she couldn’t sit around and wait for change. She had to be her own leader. Today, Ruettimann is a successful podcaster and LinkedIn Learning instructor. It’s also instructive that she...

END_OF_DOCUMENT_TOKEN_TO_BE_REPLACED

10 Lessons Learned From Transitioning From Freelance to Full-Time Employee

When I started 2020, I couldn’t have imagined all the massive changes that would take place this year. Like most people, I started the year with excitement in my eyes about the new year and decade. In March, most of those dreams were put on pause as COVID-19 became...

END_OF_DOCUMENT_TOKEN_TO_BE_REPLACED

The Millennial’s Guide to Home Insurance

Becoming a first-time homeowner is an important and exciting milestone in your life, but the experience can often be overshadowed by looming questions, worry or confusion over how to best protect your new asset. If you’re planning on getting a mortgage, you will be required to purchase home insurance...

END_OF_DOCUMENT_TOKEN_TO_BE_REPLACED

The current pandemic has created uncertainty for many people around the world. Whether you've needed to care for a loved one or lost your job because of coronavirus, most have taken a hit. These events can disrupt specific goals and plans, especially those that require financial stability to become...

END_OF_DOCUMENT_TOKEN_TO_BE_REPLACED

What Millennials Need to Know About Starting a Family

Deciding to start a family can be exciting yet anxiety-producing — all at the same time. Becoming a parent is basically a dive into the unknown. You can read and talk about it as much as you’d like and aim to be financially prepared, but you may never really...

END_OF_DOCUMENT_TOKEN_TO_BE_REPLACED

Top 5 Ways to Save Money as Millennial Tenants Right Now

Most young people have to rent their living space because they're still building up their savings for a deposit on a future house. During those years, you may experience periods where you have some spending money and others when the budget is tight. People will give you all kinds...

END_OF_DOCUMENT_TOKEN_TO_BE_REPLACED

Building a Network to Build Your Business

Starting a new business can be very daunting. In fact, more businesses don’t make it past year 1. But what many new entrepreneurs fail to do is in the first years of building their brand is leveraging their network effective. There is a misconception that solopreneurs work alone but...

END_OF_DOCUMENT_TOKEN_TO_BE_REPLACED

Even a futurist has to adjust to new normals. Like most people, Brian Fanzo could not envision a world upheaval that has sucked dry his business as a keynote speaker — months of events canceled. Chelsea Krost is also not immune. The leading millennial expert, top-rated marketing and brand strategist...

END_OF_DOCUMENT_TOKEN_TO_BE_REPLACED

When people used to talk about millennials, it used to be about all the things they were changing. Teenage millennials wanted smartphones over flip phones, constant access to Wi-Fi and a hipster coffee shop around every corner. As they grew up, they changed the world and launched it into...

END_OF_DOCUMENT_TOKEN_TO_BE_REPLACED

One thought on “Lighten Up, Millennials”