Why Home Cooking Is Boosting Well-Being 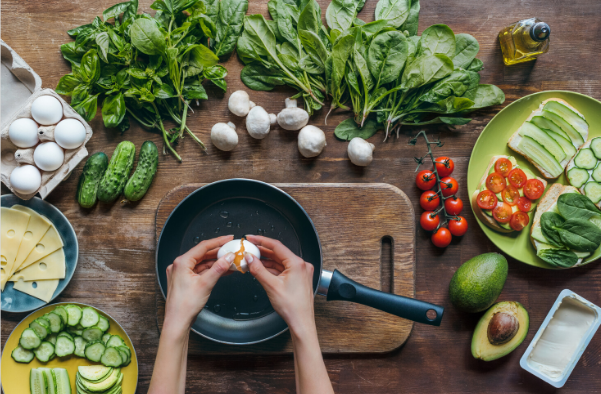 Quick question. Who used to be lazy with cooking and preferred to eat out instead? Yep, me too. At least, that was until COVID-19 turned up and forced us all to get closely acquainted with our kitchens.

Despite the ongoing uncertainty surrounding the pandemic, one positive thing that has come out of the situation is finding a new appreciation for home-cooked food. It’s not that most people didn’t like cooking or enjoy healthy eating before the lockdown. The problem was busy modern lifestyles and, possibly, a lack of motivation to cook for ourselves.

During the last six weeks though, everything has changed. Being too busy has no longer been a valid excuse for paying someone else to cook, and boredom has led to dusting off the barely used cookbooks for inspiration. Plus, as most restaurants, cafes and take away outlets have been temporarily forced to close, there has been no other option but to embrace the kitchen. Thankfully, it has turned out to be a source of enjoyment, and an effective way to relieve stress while sticking to a budget.

It’s no secret that cooking healthy nutritious food is good for physical health and well-being. We’ve all heard about the importance of eating five portions or fruit and vegetables every day, and how indulging in treats such as alcohol and chocolate should be done in moderation. But what about the mental health benefits of cooking?

A study has found that there is a link between cooking and improving mental health. The reason for this is that the process of cooking has a meditative effect and allows us to slow down by focusing on the task at hand – preparing food. Cooking has also been found to make people feel happier and more content as the act of cooking provides a sense of accomplishment. Not bad for an activity that is often overlooked as mundane or too time consuming.

Another recent lockdown discovery related to the mental health benefits of food and cooking has been the ancient Indian mind-body health system of Ayurveda. One of the guiding principles of Ayurveda is that the mind and body are not two separate systems, but are inextricably linked, and that the mind can be used to heal the body.

Many people will already be familiar with some aspects of Ayurveda, like drinking warm water with lemon in the mornings, but it goes much deeper than that. As a holistic approach to diet and health, it’s been soothing to research into Ayurveda, and is further evidence of how cooking can be beneficial for our overall wellbeing.

As more people are cooking at home, shopping habits are also changing. While many people used to make several smaller trips to the shops each week to buy food, most people are now shopping just once a week (in line with social distancing recommendations). While this is important right now to reduce the spread of COVID-19, it’s also becoming useful for planning healthy meals in advance and spending less money.

Older generations are familiar with doing one big weekly food shop, but for many Millennials and Gen Z, this is the first time that they are shopping for food in this way. From personal experience, the biggest noticeable difference has been an overall reduction in the amount of money spent on food. Previously, shopping trips would have been smaller but taken place a few times a week, instead of once. Then there was buying lunch at cafés and regularly going out for dinner. Overall, it added up to a lot of money being spent on food each week.

Likewise, shopping for food on a weekly basis and planning meals in advance has helped to minimize food waste. Being more mindful of how many meals need to be prepared has resulted in less food being wasted by only buying what is needed. Plus, it’s another way of keeping food costs down and money in the bank.

Finding a new appreciation for cooking has been an unexpected discovery during this time of lockdown. Embracing the kitchen has been an eye-opening experience of experimenting with new recipes, becoming aware of the mental health benefits of cooking and being mindful of how money is spent on food.

That’s not to say that people shouldn’t venture back out to restaurants and cafes when it’s safe to do so. As great as cooking at home can be, nothing can substitute the experience of going out to eat. There is something special about the atmosphere in a restaurant or a café that can only be achieved by the time, effort and passion that goes into running such establishments. And those business owners will need our support when they reopen.

For me, the main take-away from this time is that cooking is no longer simply regarded as a chore. Instead it has become a creative outlet that is not only good for general well-being but also the bank balance.

Hayley Maguire is a freelance copywriter and PR consultant. With a background in journalism and a love for travel, Hayley has worked with clients all over the world to help them achieve their goals through engaging content. Follow Hayley on Twitter, LinkedIn, or at hayleymaguire.com