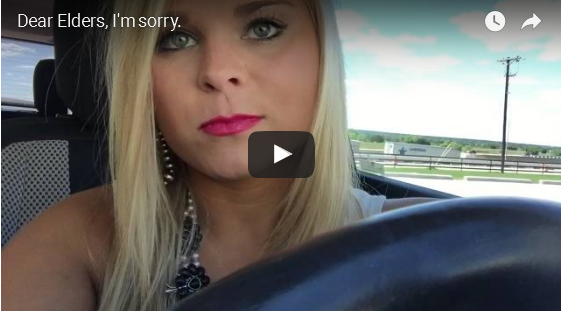 In the last week, over 40 million people have watched Alexis Bloomer’s Facebook rant. Alexis, a  journalist, turned on her selfie camera after “seeing a young man step in front of a limping elderly man and fail to hold the door open for him.”

My Facebook feed has been littered with people sharing the video – young, old and everywhere in between. I watched the video when it had less than a million views, shrugging it off as yet another generalized rant. But as it has gotten national attention, I’ve re-watched it with a different eye.

I’d love to connect with Alexis and chat with her (my email is scott@scottsavagelive.com), but in the meantime, I thought I’d share this open letter.

Thanks for sharing your thoughts with us in your Facebook video. You’re very well-spoken and articulate. I know Dan Rather has endorsed you as one of his top interns ever and it seems your career in journalism is off to a great start.

I love how you challenged us to consider what our contribution is to the world. I’m grateful you point out the contradiction between our professed values and those in the music we consume. I agree with the lack of creativity in our vocabulary. (Like you, I’d be okay if “bae” went away.) I don’t get the Tim Tebow hatred either, but I’m not sure he ever had the skills to be an NFL quarterback.

Thanks for reminding us that we can’t download work experience as fast as we do our newest app. We do need to put in the work! As you point out, building relationships is hard in the 21st century and it takes effort – something I think all of us (regardless of age) need to remember. Your mention of Slacktivism is spot on – we’re not going to fix global brokenness with liking a page or sharing a post. I loved your reminder that our identity is not defined by the size of our platform nor the performance of our posts. (I often forget that truth.) And like you, I think many of us are wondering how our generation will be remembered.

However, this is the place I want to move from applause to critique. A great deal of your video included broad sweeping generalizations of our generation. I’m not sure if you’re aware but there are 84 million Millennials in the United States today. That’s incredible! Millennials are wealthy and poor. We are white, black and brown. Some of our parents are married and some of us have no idea who our birth parents are. In the middle of such diversity, how can we be summed up in a few words like lazy, entitled, and “just existing”? Can you really accurately sum us all up as if we’re that alike?

Unlike one of your TV reports, I know your Facebook rant wasn’t scripted or edited. You may not have expected it to viral, but isn’t that the challenge in our world? Anything we do – whether it’s a reaction to a double rainbow or a prank on a sibling after oral surgery – has the chance to be seen by millions of people. We often forget the power at our fingertips.

From my perspective, you spent the vast majority of your video critiquing and diagnosing what was wrong with our generation – and I think you missed it during a lot of that. I don’t know anyone who idolizes Kim Kardashian (but then again I only have 1,000 friends on Facebook, not 84 million). You say we don’t respect our elders – but I know tons of Millennials who care for and attend to their grandparents. You say we don’t respect our country – how about my friends who have done multiple tours in Afghanistan or Iraq? Or my friends who’ve sacrificed their career to serve on a Mercy Ship or with the dying in Calcutta? According to you, we’re more divided than ever but I seem to remember the Civil War 150 years ago – that seems to beat my Facebook feed any day.

What has truly never been easier is generalizing and criticizing. It’s easy to have a bad experience and throw everyone into the category of the person who drives us nuts. It’s easy to create an “us vs them” world where we’re right and everyone else is wrong. But when we make a friend or connect with someone who sees the world differently, when we listen to the story of someone who is not like us, generalizations, cliches and labels lose their power.

I’ve spent years as a Millennial cynic myself, criticizing those older than me and those in my generation. I’ve been in the place where I saw the world for the broken mess that it is and shrugged, “well it just is what it is.” But then I learned a powerful lesson – cynics and critics never change the world. Think about it – Steve Jobs, Dr. Martin Luther King Jr., Ghandi, The Wright Brothers, Marie Curie, Mother Teresa, Nelson Mandela, Walt Disney – none of these people were cynics or critics. They were driven by hope and believed their life and work could transform the world.

You hit the nail on the head when you said we have more opportunities than anyone before us, yet we don’t appreciate the opportunity we have now.

So, Alexis, call us to more. Be as clear with your critique as you are with your challenge. Lead us forward with as much passion as you call us out. Instead of shaming us for sucking and not contributing anything, call out what is good in us and fan that flame. I’ve learned that it’s a lot easier to throw rocks at the house someone else is building than it is to build one yourself. It’s easier to be a critic than a creator.

After you’re done laying out what must change, give us a vision of what could be that is bigger than “pull your pants up and contribute something.” Paint a vision as compelling as your criticism was to your 40 million viewers.

You’re a student of journalism, so I know you’re familiar with the “I Have a Dream” speech Martin Luther King Jr. gave in 1963. Dr. King gave that 14 minute speech and it changed the world, the sound of which still echoes over 50 years later. In the speech, he spent his first 6 minutes describing what was wrong with our culture, especially in terms of civil rights. He painted a bleak picture of the current reality and why things couldn’t remain the same. After he had convinced us things had to change, he actually shared his dream of what could be and he went on to fight for it. He gave his life for that dream. He didn’t just criticize what was broken, he led change by calling us to what could be. He made us uncomfortable with reality and then called us to hope. As many of have since said, leaders do two things – define reality and inspire hope.

Alexis, you can do the same. You can lead us. You have the platform and the opportunity. Anyone can slam a generation, but it takes something much bigger to lead one. We don’t need any more critics; we need leaders who call us to our best selves. We need you and so many more Millennials who aren’t just fed up with their peers, but are fired up to be the change they so desperately want to see in the world.

Sure, your rant calling us forward might not get as many views as your anti-millennial rant. You know better than all of us that kind of news that drives ratings isn’t always the hopeful, inspiring stuff. But that’s okay.

Thanks for inspiring and challenging this Millennial.