How To Gracefully Quit Your Job 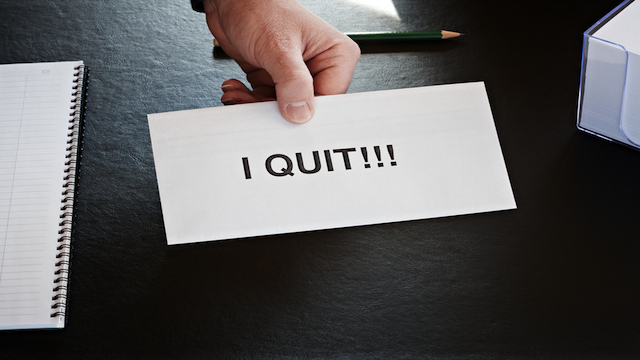 For those of us that are part of the younger generation of workers, we have grown accustomed to the idea that we will have at least one career change at some point in our lifetime. It’s very rare to work for one company your entire career, and for those just starting to enter the job market, it’s quite common to not stay at one particular place for more than a year or two when you’re first starting out.

It’s inevitable then that all of us will need to quit a job. It’s estimated that about 2 million Americans quit their job every month. This is a reality of life that they don’t hand out an instruction book for in school. (Although they really should, along with the self-help book “How to Make New Friends Even Though You’re 25” and the three part manual “How to Correctly Write a Check Without Having to Google it Every Time Your Rent is Due.”)

But take it from someone who has had to quit a few different jobs for various reasons- it may not be easy, and there might not be one right way to go about it. But there are a few key “dos and don’ts” to keep in mind while you try to navigate a potentially awkward situation.

DO- Send an email to everyone in the office announcing your departure.

Your first inclination may be to only tell your boss and your closest co-workers. But sending out an email to everyone in your department, or everyone in your office (assuming your company isn’t particularly large) may be a really great way to keep your career network intact. It also shows that you are leaving on good terms, as most people who aren’t tend to keep things quiet. Tell everyone to be sure to stay in touch and keep the rest of the email light and positive.

DON’T- Tell everyone specifically why you are leaving.

If you’re leaving because you can’t stand your company’s culture, or because you don’t get along particularly well with your boss (or any other number of not so pleasant reasons) you’ll want to give most people a vague a reason as to why you are departing. Keep the truth between yourself and perhaps a few trusted co-workers that you also consider friends.

DO- Give at least two weeks notice.

Unless there are extenuating circumstances that are forcing you to leave sooner, give your company two weeks notice so that they have enough time to find a replacement. Giving them less time will make things more difficult on their end and may hurt your chances of leaving with solid references.

DO- Finish up all remaining projects.

The temptation to slack off during your last two weeks of work will hit you as hard as “senioritis” did during your last semester of college. But if you want to leave in good standing, you’ll need to fight the urge to only show up to work to drink coffee and gossip with co-workers. Treat the projects you need to complete the way you treated the projects you were given during your first two weeks of work. You need to impress them as much now as you did then.

DO- Give your boss some helpful insights during your exit interview.

Even if your boss doesn’t give you a formal exit interview, you’ll still probably sit down with them at some point to discuss your departure. If your boss asks you about ways to improve the position, give them honest but tactful feedback. Maybe you’ll suggest that the position would function better within the company if two people split the workload. Or maybe you’ll suggest some organizational tactics that really helped you manage your tasks. No matter what though, make sure your suggestions are helpful and not coming from a place of resentment.

This one should be obvious, but don’t post anything on any of your social media pages that shows any negativity towards your former company. You may think that you’re only making the company look bad, but in reality you’re only making yourself look bad.

Do you have any tips on how to quit a job gracefully? Leave your ideas in the comments section!