1in4App – The Path to Parenthood: Highs, Lows, and Everything In Between 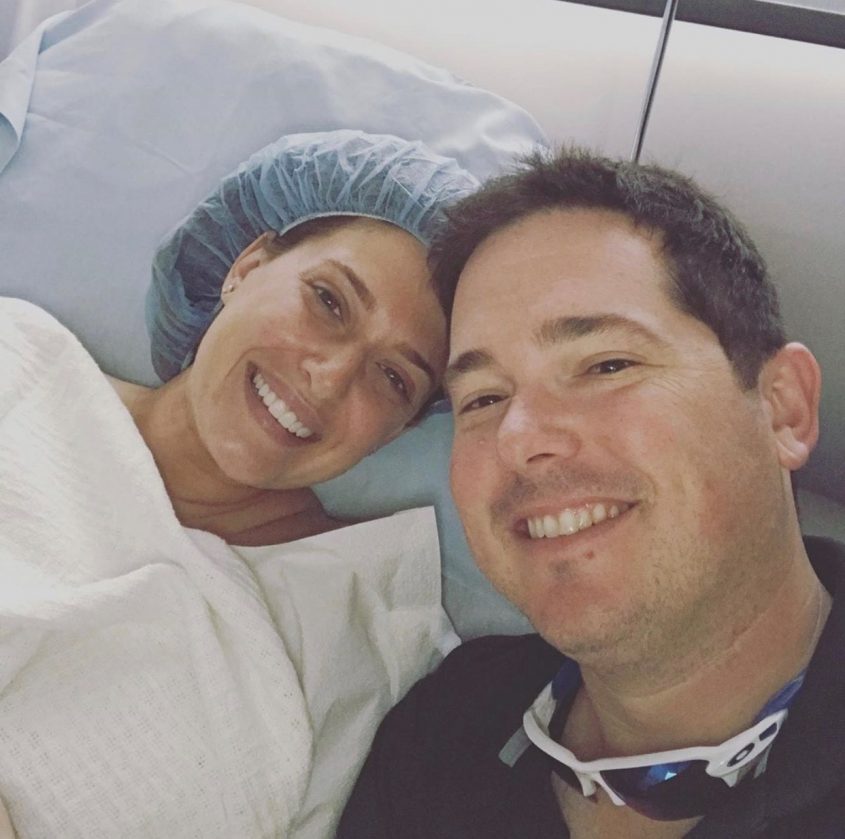 I’ve never been one to share our journey together. I’m Danielle and this is my husband, Ethan. This is us; we are 1in4, 1in6, 1in8, 1in1,000,000,000. We have suffered 7 losses, gone through 3 egg retrievals, 4 transfers, one surrogate, multiple autoimmune disorder diagnosis, and a few miracles.  This is our story of how I turned life’s challenges into something so much more and made my 1in4 label into a badge of honor:

Where to even begin. Our journey started out “normally.” We got married and got pregnant a little sooner than we had hoped but we were thrilled. I went to the doctor for blood work and an ultrasound and everything was perfect.  Everything was seamless. Until it wasn’t. The next day, I experienced my first miscarriage.

We experienced another two miscarriages, and our doctor told me to pause because she wanted to run some tests. Well, we found out we were pregnant with our miracle son, Eli, the next week!

When my son was a year and a half, the day after Valentine’s Day ‘17, I came down with a pretty high fever. I went to the doctor, and was told I had the flu and to go home drink some water and rest up. Pretty normal right? Yup, not so much. Well after not being able to hold even water down, and my fever unable to break, I decided I just needed some IV fluids.

In the ER, they could not break my fever and wanted me to stay overnight for monitoring. One brain MRI later, and I had inflammation in my brain which they diagnosed as meningitis. At that point it was the flu and meningitis, so I was thinking okay, that’s manageable, just means another 2-3 days in the hospital.

Two days later, I was in serious pain in that area in my spine, and I was unable to feel my toes, and then my ankles, and then up to my knees, to my waist, to chest. Since I was unable to walk, or feel below my chest, or even urinate, I had another MRI. My entire spinal cord (C spine to T spine) was inflamed and a neurologist told me he had never seen it, but he thought I might have something called Transverse Myelitis. (Shit!)

My condition got so bad, and they felt it may hit my lungs, so I was told to say goodbye to my son (in case I didn’t make it), and was medically airlifted to Johns Hopkins to be seen by experts in my condition.

After arriving at Johns Hopkins, I was there for a week and a half and told I was stable enough to go home. I left in a wheelchair, unable to move, shaking uncontrollably, with eyes so blurry I could barely see anything.

Something was still wrong.

After a week at home, I felt off again. The pain was back, the vision was worse, and I was not okay. I just knew it.

Another brain and spine MRI, and I now had brain lesions, larger spinal lesions, inflammation in my eyes so badly that they could have exploded.

Back to Hopkins I go. 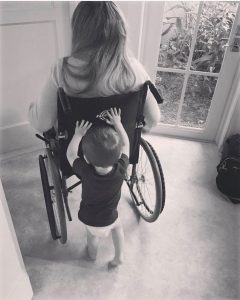 Two months later I was finally released to go home, but with some new news about my future. It was no longer safe for me to carry a baby of my own, as they feared it could potentially trigger a relapse if I had another traumatic C-section (that’s a story for another time).

Well that was a plot twist. Even if we wanted to try for a baby, I had to get better first. I had to be strong. Which meant physical therapy six days a week, sometimes two times a day. I had to learn to sit up (my first goal was to sit up for 10 seconds), sit to stand, stand up, take a step, and then of course walk. Slowly I transitioned from my wheelchair to a walker, to a cane, and then NO AIDS! It was such an accomplishment! I was strong enough for my next battle: My fertility.

We first started out by finding a fertility clinic, which I found through a friend who was going through IVF, and then went on to finding a surrogacy agency. And after months and months of searching, we saw a profile of a bright cheerful redhead who would turn out to be the nicest, most beautiful human in the world. We connected instantly and we matched. Done!

I went through my first IVF cycle to retrieve my eggs and BOOM! I had 22 eggs. Well, no one could convince me otherwise that I wouldn’t end up with 22 embryos. After chromosomal testing, we found out we had two poor quality 6-day embryos.

We transferred our first, and since I was so naive to the entire process, I had never been so positive that this would work and I would be holding a baby in 9 months.

Well, our surrogate was pregnant! I was right (kind of)! We had two great betas, and everything was great! I decided it was so certain, that I told my family and my friends the exciting news. At our next beta, the nurses started to say our current beta was “fine” and suggested that we push the ultrasound back to give the baby time, and then it would be okay.

The ultrasound came and since my surrogate lived about 7 hours away from me, I was just grasping my phone waiting for that phone call. And I got it. She called and said “I’m so sorry there was just a sac. No baby, no heartbeat.” She needed a D&C.

After she recovered, we decided to try again with transfer number 2.  Well the transfer went horribly (embryo stuck in the catheter multiple times, blood, you name it.) It ended in a chemical pregnancy.

So, after that shaky transfer, we decided to find a new IVF clinic.  I went through stims and got 18 eggs. We ended up with 2 embryos! Wooo! They were both girls. I was going to be a girl mom!

Our surrogate agreed to do a double embryo transfer, and we had a positive pregnancy test. Her betas were great, they were rising. I was having a baby in 9 months!

I was on a girls trip in Miami (with the friend who was going through IVF), and I got a call with the doctor on the phone. It was the day before the ultrasound, so I figured they were probably just going over things. But then he said, “Danielle I’m sorry, but her levels dropped. She’s miscarrying.” My world started to spin, and when I say I spent the Miami trip crying in a bed unable to talk that is literally what I did.

At that point, I was done and never ever doing this again. I couldn’t take any more pain. I was going to just move forward. I had ALWAYS wanted to adopt or foster after we finished having bios, so this would be our way! I had begun to shift my focus that way!

July ‘19 my neurological condition relapsed. Within hours it was hard to walk. Back to the hospital, back on large doses of medications, and back to the walker (but at least it wasn’t a wheelchair this time). My spine had developed new lesions, and I was back to my original fight. My neurologist felt that with my relapse I actually had a new diagnosis—a different autoimmune disorder (either something called NMOSD or MS), and they switched me to a new medication and gave me the strangest and most unexpected news…

“Danielle, I have studied the medication in pregnancy and I think you can carry. I still recommend IVF to do chromosomal screenings.  but it’s possible for you to get pregnant and carry.” WHAAAAAAAAT????

So, after relearning how to walk, step, balance, and so much physical therapy… I had a new fire lit under me to try again… this time carrying myself.

Stims again and we got 14 eggs. At this point I knew the drill. We were going to get two embryos. Apparently, that’s our number, because I was right! 2 embryos made it. And I was going to transfer both (with a few doctor’s notes releasing me of course).

My husband could only wait in the car because of the pandemic, but I went straight into that office determined that this was my moment. We decided not to tell anyone—no family and no friends—so that there would be no pressure. And I transferred. After the transfer, I felt nothing. I was convinced it just wasn’t our time.

Except I have a pregnancy test addiction, and started peeing on sticks starting 3 days after the transfer. Negative, Negative, Slightest Positive???? I tested every day until my betas, and the lines got slightly darker. Beta day came and I was pregnant (!!!), but since this had happened so many times before, I held my breath and told no one. My betas rose, we made it to the ultrasound and…

There was the tiniest embryo in the sac with the flickering of a heartbeat!

I’m now 11 weeks pregnant, and still holding my breath most days, but we’ve made it this far!

Today, I have channeled my experiences and built an app for our community.  The app is called 1in4 and it brings together articles, blogs, stories, discussion boards, photo journeys, private journals, and so much more in order to bring us all together as one community! I hope my experience and the 1in4 app will help bring everyone together, united in our one common goal: creating our family.

The 1in4 app helps people on their path to and through parenthood.  We focus on infertility, miscarriage support, surrogacy, adoption, miscarriage and more! 1in4 is filled with articles, blog, stories, discussion boards, photo journey, journals, and tools & calculators to help through your chosen path.  We all make families different but our common goal remains the same: building our family. The hope is this app will help be your guide, help you find you community, and fill you will hope. Welcome to 1in4. 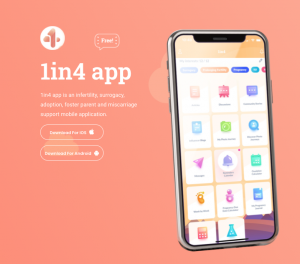