I Am Jake Cashman’s Self-Actualization 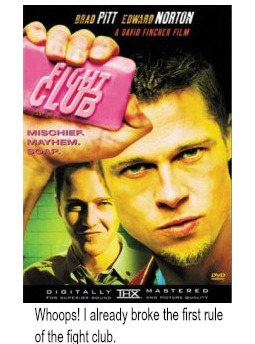 I hazard to make the assertion that a heavy portion of the Millennial generation has seen the movie Fight Club. Not well-received in theatres, the 1999 movie has gained the status of “cult classic” among those my age.

Fight Club is defined by its nihilistic violence, its gratuitous and un-beautiful sex scenes, and, most importantly its main character, Tyler Durden, as played by Brad Pitt.

Tyler Durden emulates the psyche of my generation. I believe his philosophy will lead my generation towards its ultimate self-fulfillment, and even though he is only a character in a movie, a character that only existed in another character’s head, he might be the most important person of the Millennial generation.

I want to tell you why.

But first, a lesson in psychology.

I’d like to introduce my readers to Abraham Maslow’s hierarchy of needs. 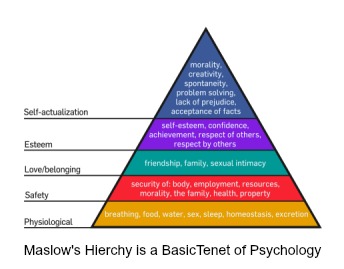 Maslow’s hierachy of needs is essentially a food pyramid of the needs a person must fulfill on his or her way to being a full-actualized, complete human being. It is a widely-referenced and highly-regarded tool developed by psychologist Abraham Maslow in 1943. One needs to achieve or satisfy the lower level in order move to the next level.

I contend that each generation, namely my grandparents’ Greatest Generation, my parents’ Baby Boomer generation, and my own Generation Y/Millennial generation has their corresponding place on Maslow’s Hierarchy of Needs.

Each generation’s place in history, and concurrently, in Maslow Hierachy of Needs, is based on what they overcame during their heyday.

My grandparents’ generation emerged from the Great Depression and dove right into World War II. These two gigantic conflicts can be boiled down to the satisfaction of two sections in Maslow’s chart: Physiological and Safety.

Think about it: The Greatest Generation jumped two rungs on Maslow’s ladder; they and their parents could barely satisfy the needs of food and sleep in their time, but somehow, when the time came to deal with issues of security of body, security of employment, of property, and of morality, they fought the “War to End All Wars”.

While addressing members of the Greatest Generation at D-Day, General Dwight D. Eisenhower said, “[Y]ou will bring about the destruction of the German war machine, the elimination of Nazi tyranny over the oppressed peoples of Europe, and Security for ourselves in a free world.”

So goes the place of my grandparents in Maslow’s hierachy.

As for my parents’ generation, this placement should be fairly easy to figure out. During the Hippie movement and the other tumultuous events of the 1960′s and 1970′s, the “Free Love” revolution allowed the Baby Boomer generation to make a ton of progress in the area of Love/Belonging, specifically in the area of sexual intimacy.

Even those who did not fully embrace the Free Love movement took the idea of friendship to a whole new level; I contend that the passage of the Civil Rights Acts of 1964 and 1968 did a great deal to broaden the idea of respect in America.

In spite of violence and opposition at times from both sides, the Civil Rights movement made clear that The Boomer generation would not tolerate the traditional White/Black divide any longer. The Acts, in their details, may have been focused on voting rights and racial equality, but the overrarching theme was to build a bridge between two cultures that had simultaneously but unequally coexisted.

The Civil Rights Movement even took the first steps towards Esteem, in creating respect in corners of society previously lacking.

That era made it okay for white people and black people to work in the same places for the same pay. It enabled Americans to simply be factory workers, music lovers, baseball players, dancers, artisans, CEO’s, ice sculptors, and pilots together.

Progress towards satisfying the need for friendship naturally ensued. And, while our parents made a lot of progress towards Esteem, by creating respect by and towards others, my generation is left in a strange spot.

So, for a Millennial, what is the struggle?

Well, our place on Maslow’s Hierachy of Needs creates a very different, almost intangible enemy to fight, an invisible ghost to overcome.

Look at the chart again:

But, my generation, in its obvious struggle towards self-esteem and confidence, must conquer no outside force.

My generation, in order to achieve self-actualization, has to take pills for ADD and ADHD and bipolar disorder and anxiety and whatever else.

It has be self-centered.

It has to look a sick homeless person in the eyes and actually see, tangibly and glistening, the man’s mental illness.

And it has to empathize with that man, no matter how difficult.

It has to fight for self-confidence, both physically and mentally, just as, in Fight Club, Edward Norton’s character had to destroy other, real-life men AND his alternate personality, Tyler Durden, in order to find the place where he is in control of himself.

We Millennials have to fight demons and conquer problems that exist only in ourselves. We have to win the battle of our minds.

After all, once all the Millennials find out that we are ”not [our] jobs… [or] how much money [we] have in the bank…. [or]  the car [we] drive,”  we become more than any previous generation can imagine. We become so different from our parents, the Boomers, who eventually got around to focusing on Esteem and confidence.

As we legalize same sex marriage, we lack prejudice. In fact, as I just Googled “States Currently Allowing…” Google autocorrected my search to “State Currently Allowing Gay Marriage.” This in itself typifies the sea-change we are creating as far prejudice goes.

We may work in an office solving problems, and at night, we will create. creativity. itself.

We will create, not Project Mayhem, as the men in Fight Club did, but Project Creative, and it will transcend and transform society.

We will paint on canvasses and on PC programs, we will write on blogs and on Twitter, we will take endless amounts of pictures for platforms such as Instagram and Facebook.

Hell, we will create platforms on which others can be creative. The social media boom has already magnified voices, built arenas for each and every computer-literate person to engage in free-flowing, fun-loving creativity for creativity’s own sake.

I wouldn’t be writing this if I didn’t think I had an audience to read it, and, because of social media, the most important invention of my generation, I DO have an audience, one that spans states AND continents.

Further, by engaging in new adventures and trips and random experiences, such as the San Francisco vacation I am taking this Thursday, or by running a Tough Mudder race, as this New Yorker journalist did just for fun, we create spontaneity.

And we will accept facts, and the fact of the matter is this, as Tyler taught us:

“It’s only after you’ve lost everything that you are free do anything.”

After all, if Millennials appear to not respect the value of material “things”, that’s merely because we are after something intangible.

We are after self-actualization, and you need to be free of things to do that.

And soon, very soon, just by the shear pursuit of spontaneity and creativity and problem solving and lacking in prejudice and acceptance of facts, the term at the very top of Maslow’s pyramid will be achieved.

That term is morality.

Morality will come, and the world will be self-actualized.

We can all thank Tyler Durden for that.

He’s the doubting voice in our head we Millenials have to conquer.

He’s the man driving us towards the edge just so we can experience what the edge feels like.

Don’t worry. We will get there.

We will beat Tyler Durden.

We will look over the edge, but we will not fall.

We will stand at the precipice of history, fully aware of our significance and fully embracing the tremendous pressure generated by that significance, and we will not falter.

We will be self-actualized.